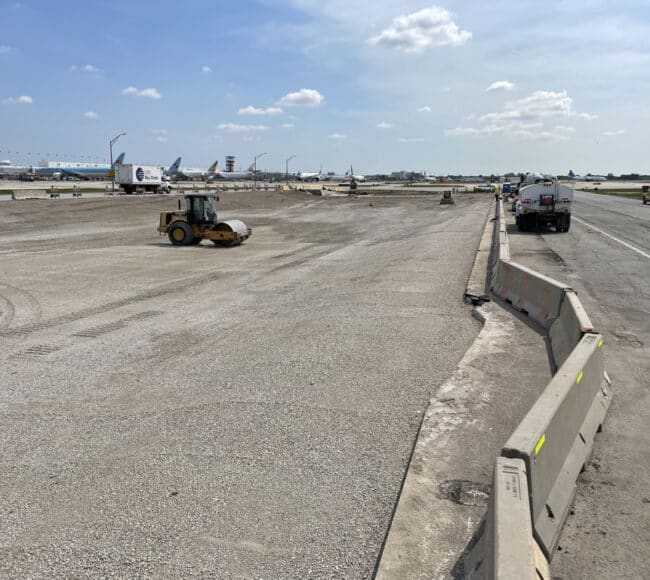 RW Collins Co. was contracted to perform decommissioning and removal of (18) 50,000-gallon Jet A fuel underground storage tanks at O'Hare International Airport. These massive tanks were located in between taxiways near the International Terminal at O'Hare and provided a number of logistical challenges. In addition to the underground tank removal scope, RWC performed excavation of almost 50,000 tons of contaminated soil and final grading and restoration for the previous tank farm and support areas. This tank farm was the largest tank removal by volume in Illinois history.

The Super Satellite tank farm, installed during the early 1980s, supplied Jet-A fuel to the International Terminal for almost 40 years. With the introduction of the O’Hare Fuel System Improvement Program, as well as future plans for runways and taxiways, the tank farm was slated for decommissioning. Our firm had experience removing other massive tanks at O’Hare as a part of airport expansions, however, these 18 tanks, at 50,000 gallons each, in-between active taxiways, were certainly a new challenge.

Work began at the adjacent fueling area for trucks and other airport support vehicles, which included the removal of two oil-water separators and seven different fuel islands. Once these tasks were complete, work began on the tank farm itself. All tanks were inerted and pre-washed to ensure LEL and flammable vapors were at zero or safe levels. RW Collins utilized two large excavators on either side of the tank to carefully remove it from the excavation and place the tanks at grade for cleaning and destruction. Once the first tank was cleaned, scrapped, and hauled off-site, we repeated this process for the remaining seventeen tanks.

After the tanks were safely destroyed and removed from the site, work began on backfill and grading for the intended future use of the area. In total, we excavated and disposed of almost 50,000 tons of contaminated soil from both project sites, which were then backfilled with CA1 & CA6 before a final layer of topsoil and seed.

This ambitious project provided frequent logistical and engineering challenges. These included the scale of the tanks, the location within taxiways at the busiest airport in the world, and unknowns of an almost 40-year-old underground tank farm. Despite these obstacles, this was a truly rewarding project to be a part of and one which we took immense pride in completing safely and on time.