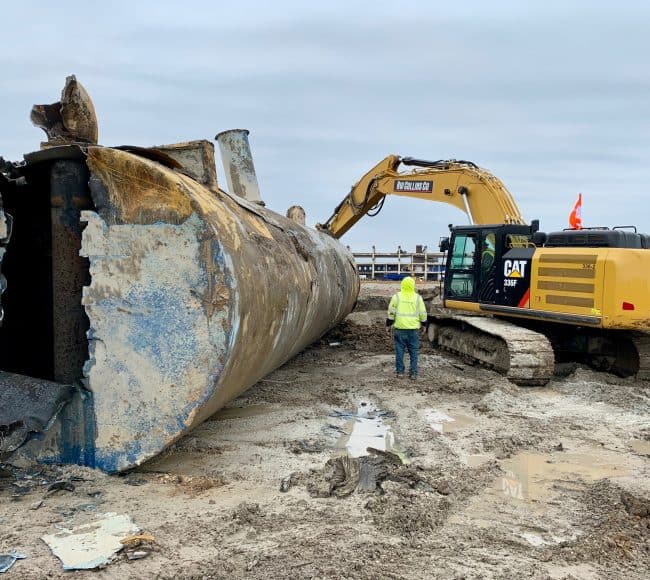 RW Collins was contracted to perform environmental remediation and underground tank removal for a new runway expansion at O'Hare International Airport. To date, we have removed over 25 USTs, ASTs, hydraulic lifts, and oil-water separators, in addition to hauling thousands of tons of contaminated soil associated with the tanks.

Part of this project included the removal of two 30,000-gallon oil-water separators that were buried at a total depth of 22 feet. Despite their status as unregulated tanks, these separators presented unique challenges due to their complicated internal structures. We carefully performed pumping, removal by excavation, and certified destruction for these oil-water separators.

With over 10 feet of material covering the separators and tank diameters of 10 feet each, it was a challenge to dig deep enough to uncover and remove the separators. Using a Caterpillar 336F and 315D with a shear attachment, we were able to safely remove the tanks and finish cleaning the interiors.

Since these tanks were oil-water separators with ground-level drains, they collected garbage and other waste during their use. Because much of the waste was solid, pumping all of the sludge-like material proved to be inefficient. To solve this, we mixed the waste left after pumping with dry wood chips and hauled the material as non-hazardous waste to a landfill. Following cleaning of the tanks, we compacted and cut up the steel for recycling.